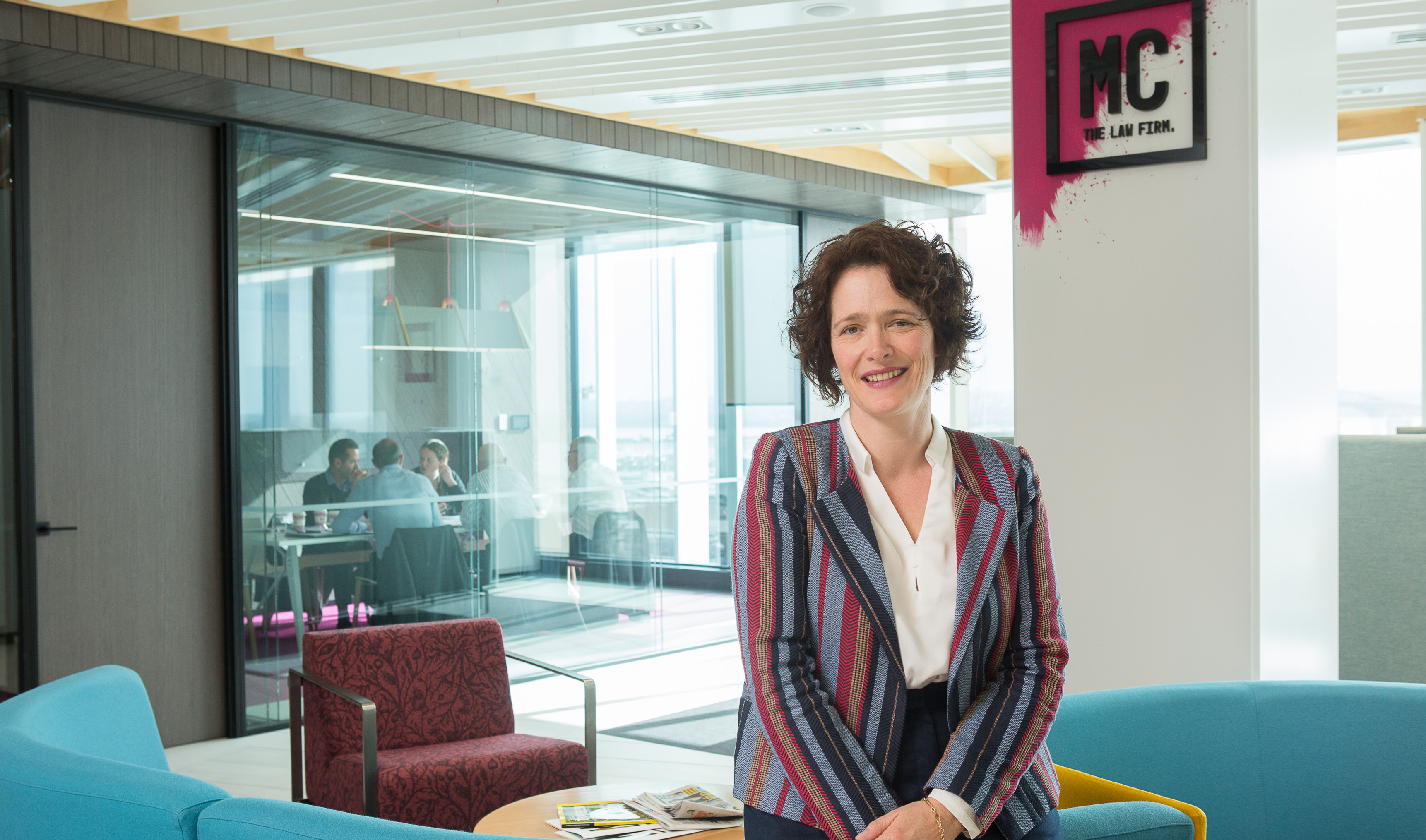 Kylie Mooney, Chief Operating Officer at law firm Meredith Connell, worked with TwentyTwo’s David Lambie throughout the process of their Auckland office relocation. She explains how they leveraged the move to create cultural change within the organisation.

Previously, Meredith Connell occupied five floors with a central core. The reception was old-fashioned with not enough seating – we used a lot of space inefficiently. Each floor had its own kitchenette so there wasn’t a central point where everybody came to meet and chat.

We had an illusion that everyone had their own office, but actually no-one did – the ‘walls’ were bookshelves with a gap of about a metre between the top of the bookshelf and the ceiling. You could hear conversations two or three rooms away. The space wasn’t fit for purpose anymore and that was a big part of our decision to review our accommodation needs. This, combined with the fact our lease was expiring in December 2016, meant we needed to decide if we were going to stay in our current office building and refurbish or whether we moved to new space.

Late 2014, David came to talk to us about the market and undertake an initial cost-benefit analysis on staying or moving. David recommended the firm carry out a Strategic Workplace Analysis on how our staff wanted to work. The timing was good for us as we were also carrying out workshops on our brand and what we wanted the firm to look like, which included our office space, as well as all other branding.

Warren and Mahoney carried out the Workplace Analysis, running three workshops to talk about how we wanted to work, carrying out a survey of all staff, holding one-on-one interviews and they also had an architectural student come in and assess how we actually used our existing space. A couple of things really stood out for us. First, people wanted to feel more connected and engaged with the firm, junior lawyers wanted more access to partners and everyone wanted somewhere quiet to work.

We did consider staying in our previous building. However, the cultural impact on the organisation from what we would get out of a new office environment – particularly given the feedback from the survey – really helped push the argument towards relocation. David guided us through the entire process, he was instrumental in helping us find the space, advising us on the potential office space available, reviewing the Auckland landscape and where it is going. We were making some pretty big calls on what Auckland’s going to be like in 12 years’ time and hoping someone isn’t going to curse us in a few years because we got it wrong!

When we first heard about the building we’re now in, we didn’t want to see it because we thought it was in the wrong part of Auckland’s CBD. We were persuaded to see it and saw the advantages… one floor plate, contemporary, well-designed and it was easy to see what we might achieve. The single floor plate really sold it for us as it addressed the desire for people to be more connected to the other teams and people in the firm.

When negotiating the lease, David helped us through the process. While our own lawyers negotiated the specific lease details, David’s role was ensuring the development of our project plan, including the hard and soft fitout timings, the design process and procurement of key suppliers. This is not our core business and we needed an expert who could help us manage the risks.

David helped us select the Project Manager and Architect and was a key member in the selection of the construction team. He played a critical role as the project guide and guru, particularly in the early stages. He was able to interpret what we wanted into the language of the designers and project managers. The Project Manager worked closely with David and they had a really positive working relationship. When I was frustrated about an issue, David was the voice of reason and would explain what was happening and why. He was on our side the entire time.

I know it’s a cliché to use the phrase ‘trusted advisor’ but that is what David was for Meredith Connell. He gave me confidence in the process and the project and helped us get a sensational result – we moved in on time and on budget with an outstanding fitout.

On the day staff moved into the new office, they were delighted. We’d made a real effort throughout the process to keep everyone informed of what was going on using intranet posts, email articles and mock set ups of the work stations. Every team appointed a change manager who we met regularly and they passed information back and forth to their team.

Given the health and safety concerns, we were unable to provide as many site tours as we would have liked. So while the team had seen photos and some people had had site visits, this wasn’t the case for everyone. Plus, the site was still a work in progress when people had visited so no-one had seen the finished fitout.

Not only were we going to open plan but, as part of the move, we radically changed our IT to operate in the new work environment and we went through a paper reduction project – we reduced our paper on-site by 60% prior to the shift. This all had to be communicated and the new work practices adopted before we moved.

Given the changes to how we were going to work in the new building, at the request of staff, we developed guidelines on how the new space was to be used. For example, our library is for concentrated work so you don’t take your phone or food, there is no talking and, if someone is working in there, you don’t bug them. Our collaboration rooms are for working in, meeting others or talking on the phone. Again, if you are working in a collaboration room, the rule of thumb is you leave the person to it.

While I expected the new office would change the culture of the firm, we didn’t appreciate the extent and ways this would happen. I thought we would get some negativity, but we didn’t get any. The biggest criticism we had on day one was the sparkling water wasn’t sparkling enough (and they were right, it wasn’t, a setting hadn’t been adjusted properly). I wanted people to take their laptop home on the Friday night and come in on Monday, dock their device and start working. The office was unpacked and the firm was functioning by 10.30am on Monday. 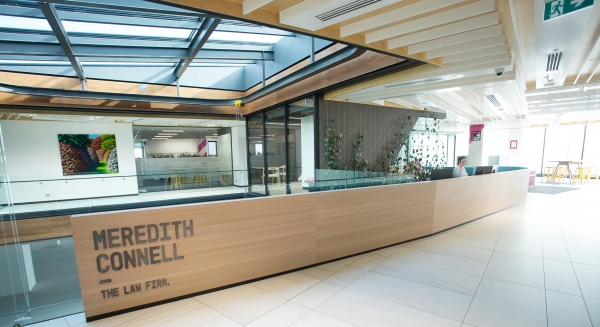 One of our goals in developing the space was to ensure the design reflected the values of the firm. For example, one of our values is meritocracy. So that translated into open plan for everyone, including partners. Another value is connectedness – ‘one organisation that works together’. By using glass, we created the visibility that allows everyone to feel a part of the firm, not just their team. We also achieved this by having one staff kitchen right in the heart of the floor plate. We ‘invested’ in a great coffee machine because we knew people used to go out for coffee at our old building.

Now, by 7.30am, there are people sitting having breakfast, reading the paper, literally like a café. By 8.15, there are 10 people congregating informally around the coffee machine and chatting in a way they never did before. One of the comments I’ve had the most often since we shifted is that people are talking to others in the firm that you would have had to make an effort to go and see before. It has improved the morale and created a more collegial working environment.

Some of the other benefits are that we can easily discuss things with each other or within the team. As a result, the client gets work faster and this can be used as a learning exercise for the junior solicitors. This met one of our other objectives – giving the juniors more access to partners. The 29 collaboration rooms and library with seating for 15 means there is always somewhere to work if you want peace and quiet.

We’ve found it easier to attract talent – particularly for non-lawyers. We’ve had recruiters coming through who now tell people “Put aside all your preconceptions about law firms. Just go and see Meredith Connell, they’re different”.

The changes as an organisation have been fantastic. I didn’t expect the level of engagement we received and I think that’s because we have got a sensational result. AUT recently completed a research study on the office and how it meets best practice. They interviewed more than 50% of our staff and they had nothing bad to say or improvements to make. We have shown so many organisations through our office. We’re a showcase! I couldn’t be prouder of what we achieved.